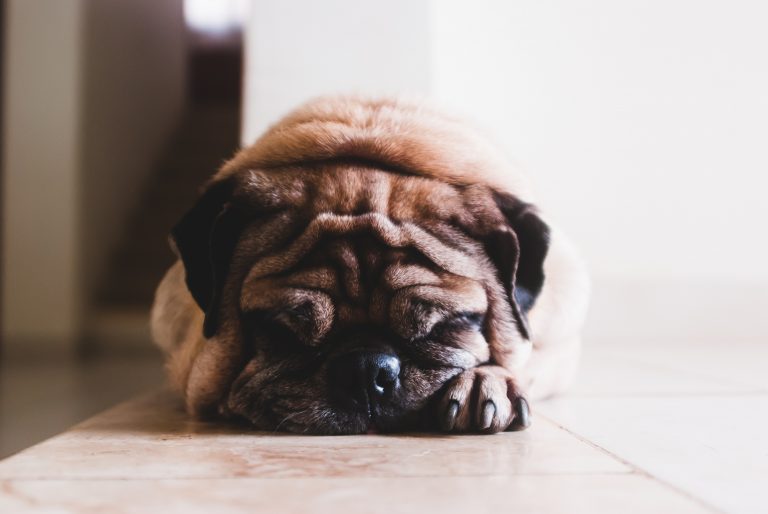 There are few things more smile-inducing and “awww”-inspiring than seeing a cute pup sprawled out and snoozing away. But dogs don’t just sleep because it’s adorable. Just like in people, sleep for dogs is a critical aspect of their health.

When you start thinking about a dog dozing off, it raises a handful of questions: how is dog sleep like human sleep? How much do dogs need to sleep? Can they sleep too much? And do they dream as we do?

This guide helps answer these questions and more so that you can better understand your dog’s sleep and promote the sleep that they need to continue being a healthy and happy part of your family.

How Much Do Dogs Sleep?

If you have owned a dog, you’ve probably noticed that sleeping is one of their best abilities. Whether it’s safely sprawled out in the shade on a hot day or curled up at the foot of your bed at night, you’ve seen how a dog can get comfortable and doze off in all sorts of places and at all times of the day. But you may not have ever tallied or noticed exactly how much your dog slept in total through the day, especially if you spend part of your day at work or otherwise away from home.

It turns out that dogs need a lot of sleep. In general, dogs spend about half of the day or a little bit more, ranging from 12-14 hours, asleep. However, several factors affect exactly how much a dog is likely to sleep on an average day:

It’s clear that dogs log a lot of time snoozing, and that’s totally normal. But some dog owners may worry that their dog is sleeping too much. It can be hard to know when your dog’s sleep crosses a line from normal to too much, but here are some signs to watch out for:

If your dog’s sleeping habits have changed — by sleeping more or less — it is important to raise your concerns with a vet. A vet can help review what’s normal and conduct any tests that might be needed to determine if your dog has any pressing health issues.

If it is determined that a dog is sleeping more than is normal, there are many potential causes.

The Science of Canine Sleep

You may have looked at a sleeping dog and sighed in response to such cuteness, but you may have also wondered about what’s really going on in your dog’s brain and body when snoozing so peacefully. In many ways, the science of canine sleep is similar to the science of human sleep. We’re both mammals, and even though the human brain is obviously more advanced, there is considerable overlap with regard to the physiology of sleep.

Research has identified that the brain waves of dogs during sleep are reminiscent of those of humans. Like people, dogs go through different stages of sleep including short-wave sleep (SWS) and deep sleep (often referred to as rapid-eye-movement, or REM, sleep). SWS is the period after first falling asleep as the mind and body start to relax. In REM sleep, though, there is more brain activity, and though researchers still don’t fully understand all of the ins-and-outs of deep sleep even in people, this sleep is thought to play a major role in getting the full amount of needed rest and recovery.

In humans, the sleep cycle — going from SWS to REM — is long and drawn out. In dogs, though, this cycle takes place much more rapidly. Though it can depend on the breed, some dogs can enter REM sleep in under 20 minutes. It’s normally pretty clear that your dog has entered REM sleep because this is when you will observe involuntary eye or muscle twitching. Some dogs also make noises, like whimpers or quiet barks, when they are in a deep sleep part of their sleep cycle.

The fact that your dog enters deep sleep much more quickly also means that its overall sleep cycle is much shorter. As a result, dogs don’t need the kind of long blocks of uninterrupted slumber that humans do. While fragmented sleep can be a major cause of drowsiness in people, it’s not really an issue for your canine family member. They can accumulate the sleep that they need in smaller chunks throughout the day. 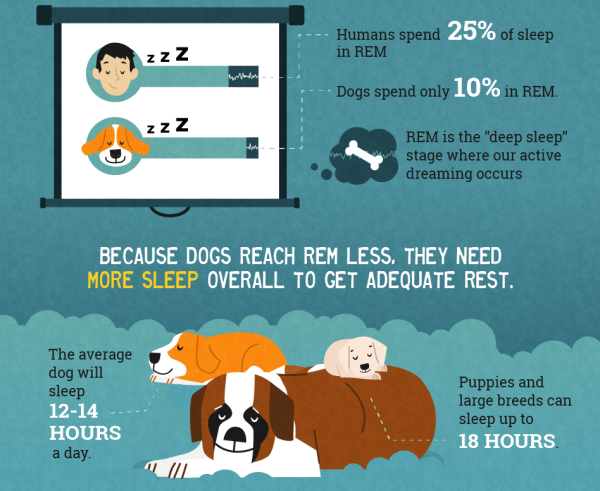 Another consequence of the shorter sleep cycle for dogs is that they are generally more easily awoken. Dogs are more easily awoken during short-wave sleep, but even during deep sleep, it’s not uncommon for a dog to wake up at light sounds. This may be even more common in certain breeds that have historically been guard dogs or protectors.

Should I Wake My Dog Up?

Some experts advise against waking a dog that’s in deep sleep whenever it can be avoided. While this is a good policy — after all, let sleeping dogs lie — know that the consequences of disrupted sleep for a dog are not the same as for people. Even if a dog wakes up in the middle of a sleep cycle, they can usually just recoup that lost time with sleep later on in the day.

If you’re like most pet owners, you’ve occasionally wondered what exactly is going on inside your dog’s head when they are asleep. In particular, if you’ve seen your dog appear to be running or pawing at something while sleeping, it’s natural to have asked yourself, “do dogs have dreams?”

The short answer to that question is yes. Without the ability to talk with our four-legged friends about exactly what’s going on in their heads, we have to draw conclusions from the best available scientific research, and that research points to dogs having dreams along the lines of those that humans have.

In people, dreaming occurs during the REM stage of sleep when brain activity is ramping up during a deep slumber. Because dogs have similar patterns of brain waves and similar stages of sleep, most researchers extrapolate that dogs likely have dreams. Dream-like brain waves have also been detected in other mammals like rats, and this further supports the hypothesis that what’s going on in a dog’s brain during REM sleep is akin to what we think of like dreams.

Of course, human dreams can be detailed and intense, and this is largely a product of the sheer power and complexity of the human brain. There is a great deal that is still unknown about dreaming, but most experts believe it is part of the brain’s way of processing and cleaning up information that has been gathered over time. That’s why we may dream about something that happened recently or that we’ve been ruminating on of late.

In addition, dogs shouldn’t be expected to have the same kind of extended and involved dreams that we do. This is primarily because of the shorter nature of their sleep cycle. Dreaming happens in deep sleep, and because they sleep in more compact blocks of time, they probably don’t have the kind of encompassing dreams that some people do.

Ultimately, we don’t know with certainty that dogs are dreaming, but the best evidence available supports the idea. And if they are in fact dreaming, we’ll never know for sure what they are dreaming about. Nevertheless, we can watch a sleeping dog and simply imagine, and that just adds to the cuteness.

You might have noticed that your dog tends to have certain routines when it comes to sleep. These routines can relate to the time of day or to a favorite part to lie down for a nap. Another routine can revolve around a dog’s sleeping position.

As with people, the primary sleeping positions for dogs can be identified by which part of the body they are lying on. Each of these positions can have small modifications and can tell you about your dog’s mood and comfort.

If your dog is sleeping on its back with all four paws in the air, it usually indicates a level of comfort and security. In this position, your dog is at its most vulnerable, which means it wouldn’t fall asleep like that unless it felt safe and at home. Sleeping in this position can also mean that your dog wants to cool down since exposing the full belly to air helps with temperature regulation. 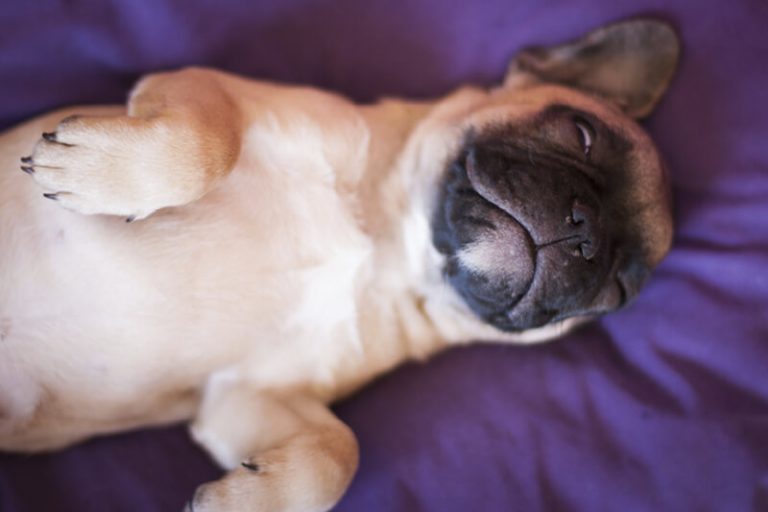 If your dog is sleeping on its side with its legs outstretched, it also indicates that your pup is comfortable and tired out. This is a very relaxing position for your dog and can also help with cooling by allowing plenty of airflow around the belly. 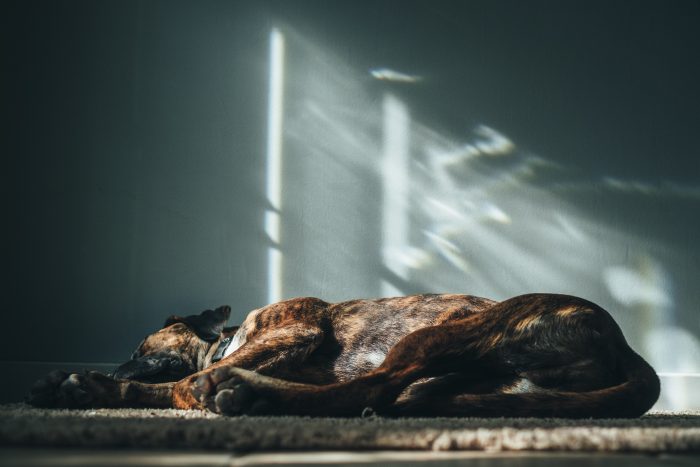 If your dog is sleeping on its stomach, it may not be in a deep state of sleep. This is usually because the legs and other muscles are not able to relax sufficiently to allow your dog to slide into a deep sleep. However, some dogs may be able to fully stretch out and really doze off in this position. In other cases, this may be a restful position but one that your dog can easily jump up from, allowing your dog to relax without entering a full sleep cycle. 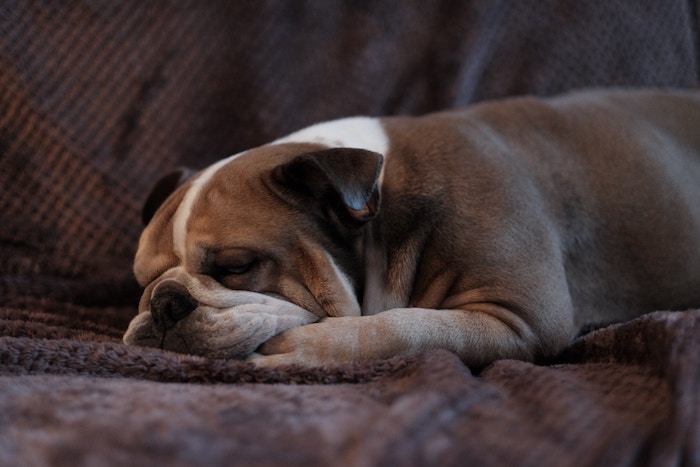 In general, regardless of which part of the body your dog is lying on, the more curled they are, the less likely that they are in deep sleep. This is because curling up can keep your dog’s muscles more prone and less relaxed. This isn’t a problem, it just means that your dog is probably waiting for another time to get the really restorative shut-eye that it needs. It may also just mean that your dog wants to retain warmth, which it can most easily accomplish by curling itself up.

The way your dog positions itself relative to you or to other dogs or animals can also be telling about how comfortable and calm your dog feels. Sleeping back-to-back is often a sign of affinity, so if your dog lies down with its back to you or to another pet in your home, it is usually an indication that it has a feeling of warmth and trust toward you or that pet.

How Can You Help Your Dog Get Better Sleep?

Most dog owners want to do everything that they can to help make sure that their pup is safe, happy, and healthy. Getting quality sleep every day can be a key component of that, and there are some strategies that you can put in place to help your dog get better sleep.

Develop routines: as we mentioned earlier, dogs benefit from regular routines. This doesn’t mean that you have to have the same exact schedule every day, but whenever possible, try to have continuity in terms of certain activities (walks, play, eating, sleeping) each day.

Give them plenty of play: getting exercise and activity can promote your dog’s overall health and can also contribute to better sleep habits, too. A minimum of 30 minutes of exercise is needed for all breeds, but more active dogs may need much, much more. Play and activity can also involve mental stimulation for your dog and not just physical exertion.

Give proper nourishment: make sure that your dog is eating a balanced diet and getting all the nutrients that they need. If you have any questions about the optimal food for your dog, check with your vet.

Create an inviting sleep space: just like you want a comfy mattress, your dog can get better sleep with a welcoming dog bed or other well-cushioned den.

Follow a regular schedule for check-ups: even if all seems well, don’t skip your normal check-ups at the vet. These check-ups can help nip problems in the bud and give you an opportunity to ask questions about how to best support your dog’s health.